Best of The Fountain Workshop in 2017

2017 was another fantastic year for The Fountain Workshop. A big thank you to all our wonderful staff for working so hard this year. We also want to thank all of our associates in the construction industry and beyond.

Before we properly throw ourselves into the new year, let’s have a look at some of our 2017 highlights!

– Design Junction at Granary Square, September (Photo credit: John Sturrock) – Every year King’s Cross welcomes the Design Junction team to celebrate the wonders of the world of design. This September they took over Granary Square, erecting a number of interactive exhibits in the Square, and in the surrounding areas. It was fantastic to have our water features be the background for this great festival. More information on Design Junction can be found here.

– Rathbone Square opened to the public in December (Photo credit: Allan Owen) – We have seen a number of new projects reach completion in 2017. Rathbone Square, just off Oxford Street in London, is one such project. We were invited to create a series of water features for this quiet public square, including a number of water tables (pictured below) and water rills inserted directly into the flower beds that are found throughout the space.

– Hull 2017 City of Culture redevelopment, June – It’s not very often that you get to be a part of an international celebration of culture, but that is exactly what happened to us! Commissioned as part of Hull’s redevelopment following its appointment as the European City of Culture for 2017, The Fountain Workshop was charged with making two very different water features for different areas of Hull City Centre. Pictured are the interlocking circles of jets that form the Queen Victoria Square water feature. WE also placed a water feature in Trinity Square, pictures of which can be found on the Hull Project page.

– The IFO art installation reflected in our Pancras Square water features (Photo credit: John Sturrock) – Now a well-recognised part of King’s Cross, the Identified Flying Object (IFO) art installation first appeared in King’s Cross in 2011, ‘floating’ above the then-construction site of Pancras Square. It has since ‘landed’ and now sits as a permanent feature of the King’s Cross landscape outside King’s Cross Station. This beautiful photo of the artwork reflected in our Pancras Square pools was taken by local photographer John Sturrock and perfectly captures the use of the light in both the IFO and the water feature.

– Our Managing Director David Bracey spoke in Warsaw in November – A particular highlight of the year was when David Bracey was invited to travel to Warsaw to speak at an international conference on the use of water in public spaces. David used a case study of the Granary Square project (see above) to highlight the importance of integrating water into the public realm. He focused particularly on the process of creating a water feature such as this one, walking the many students in the audience through the winning formula. This was also a first for The Fountain Workshop’s new marketing campaign as it marked the first time a talk from one of the company’s leaders was livestreamed across the globe. Though there were a few technical difficulties, the trip was an overwhelming success! 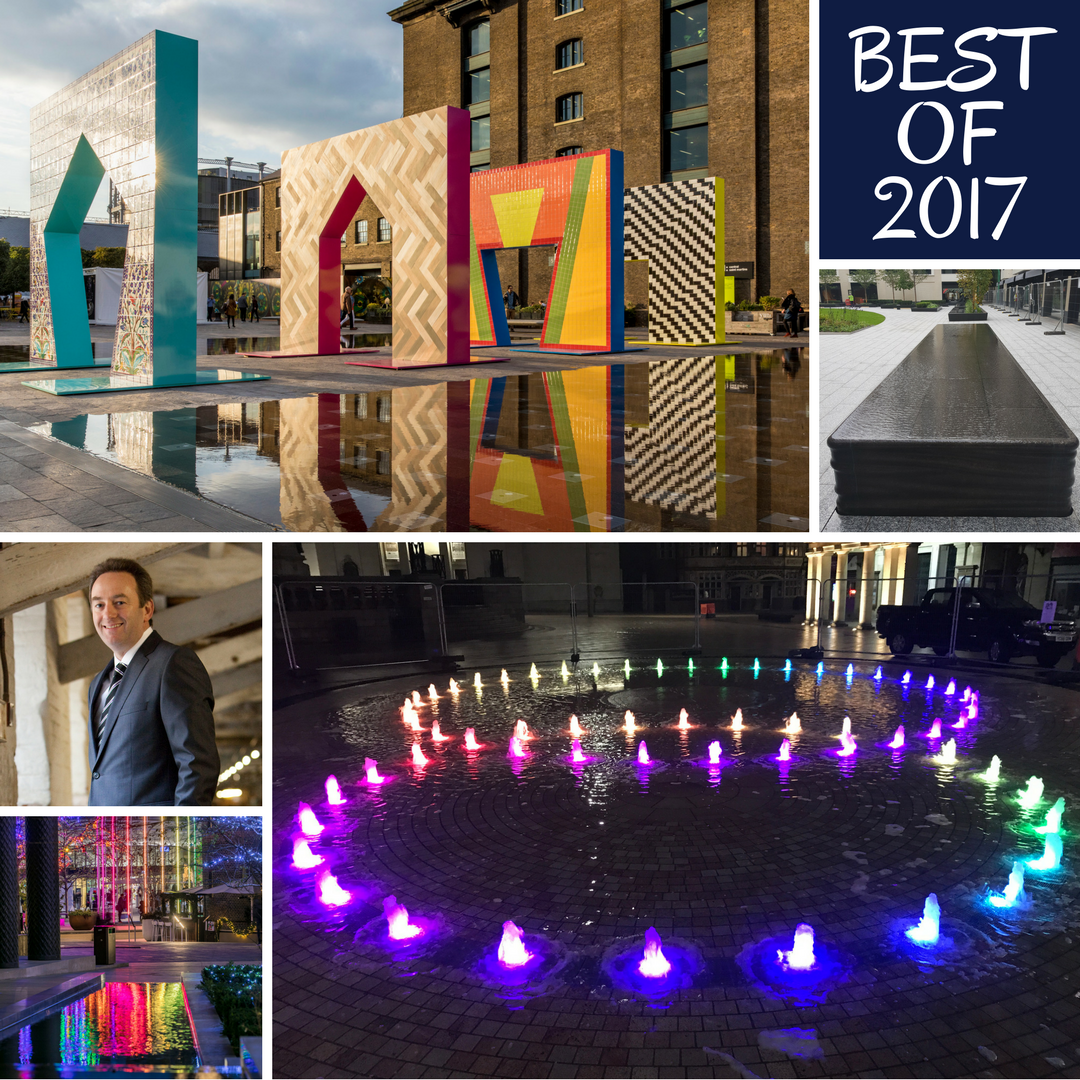